Professor Frederick Leung has been given many awards and titles throughout his distinguished career in mathematics education, but his recent election to Honorary Member of the International Association for the Evaluation of Educational Achievement (IEA) marks the first official recognition of his valuable contribution to Comparative Education (CE).

IEA is the largest comparative education organisation in the world, carrying out the biggest and most rigorous studies into CE globally. It is an international cooperative of national research institutions, governmental research agencies, scholars and analysts who work together to research, understand, and improve education across the globe.

“I am the 29th  person to be given this honour in IEA’s 60-year history, and the first Asian,” said Professor Leung, who is Chair Professor and Kintoy Professor in Mathematics Education with the Faculty, and who was also recently appointed Dean of the Graduate School at HKU. He also holds the Hans Freudenthal Medal, which is the highest international accolade in mathematics education, from the International Commission on Mathematical Instruction.

He has served on IEA for 28 years in many different capacities, mainly in connection with Trends in International Mathematics and Science Study (TIMSS). Indeed, Professor Leung was the Hong Kong Research Coordinator at the very first meeting to discuss TIMSS in 1991, remaining through its launch in 1995 to now. “I think I am the only original left,” he laughed. “The only one who has been onboard since 1991 – that’s a record!”

Throughout much of his nearly three decades with IEA, Professor Leung has been viewed as a bridge between Asian members and the rest of the IEA’s members. “This has come about because Asians can be reticent about speaking out, particularly if English is their second language,” he said. “I became a sort of spokesperson for the Asian contingent, expressing their views for them at meetings.”

He has also acted as the Hong Kong representative at IEA for nearly 20 years, and at one stage was elected to its Standing Committee. Five or six years ago, when the Executive Director retired, he was appointed to the group to find his replacement. It would be fair to say that Professor Leung is something of an Asian icon at IEA.

A measure of how meaningful this honour is can be taken from the heady company in which Professor Leung finds himself: other iconic Honorary Members include Benjamin Bloom (1913-1999), the American psychologist who made several outstanding contributions to education, mastery learning and talent development.

In his time with IEA, Professor Leung has seen comparative studies grow in popularity and significance. “When TIMSS started, only 20 countries were involved. Now it is 60,” said Professor Leung. “More countries have realised that it is important for them not only to be inward looking, but to see how their education policies compare to those of other countries.”

He has also seen the technology evolve. “Statistical tools for grading have become more sophisticated and accurate. Scaling statistical techniques help analyse all aspects of the efficacy of education – countries cannot afford such testing on their own.”

“Technology within education also continued to evolve, and e-testing – where students will do exams on tablet or computer – will be the new trend. E-testing allows for more interaction – according to a student’s answers, you can modify the questions to his/her level, thereby making the results more accurate and more insightful. We cannot do this globally yet because of different levels of technology, but IEA is developing it.

Reflecting on IEA's recognition, Professor Leung said, “I was not expecting this honour and I am very humbled to be counted among such eminent figures in this field. I also feel that being the first Asian to receive this honour is indicative of the increasingly important contribution in the international field of Asian scholars in general. It is representative of the growing voice of the Asian community – whether it be the Hong Kong community, the wider Chinese community or the Asian community as a whole.” 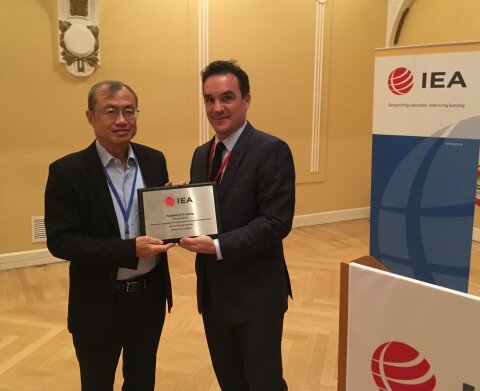 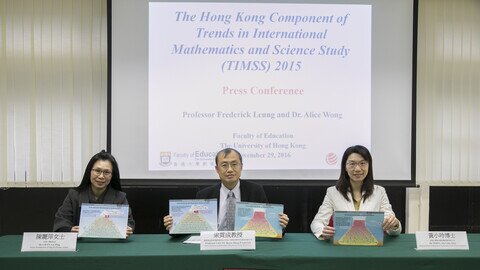 A press conference was held in 2016 to inform the public about the findings of TIMSS 2015.

Game for a Change