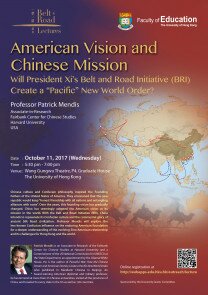 About the Belt & Road Lecture

Chinese culture and Confucian philosophy inspired the Founding Fathers of the United States (the US). They envisioned that the new republic would keep “honest friendship with all nations and entangling alliances with none”. Over the years, this founding vision has gradually changed. China has seemingly adopted the American vision as its mission in the world. With the Belt and Road Initiative (BRI), China intends to rejuvenate its Confucian culture and the commercial glory of ancient Silk Road civilization. Professor Mendis will explore the less-known Confucian influence on the enduring American foundation for a deeper understanding of the evolving Sino-American relationship and its challenges for Hong Kong and the world.

Patrick Mendis is an associate in research of the Fairbank Center for Chinese Studies at Harvard University and a commissioner of the US National Commission for UNESCO at the State Department, an appointment by the Obama White House. He is the author of Peaceful War: How the Chinese Dream and American Destiny Create a Pacific New World Order (also published in Mandarin Chinese in Beijing). Award-winning American diplomat and military professor, he has lectured at more than 25 Chinese universities, visited all the provinces of China, and traveled to every state in the US as well as 126 countries.